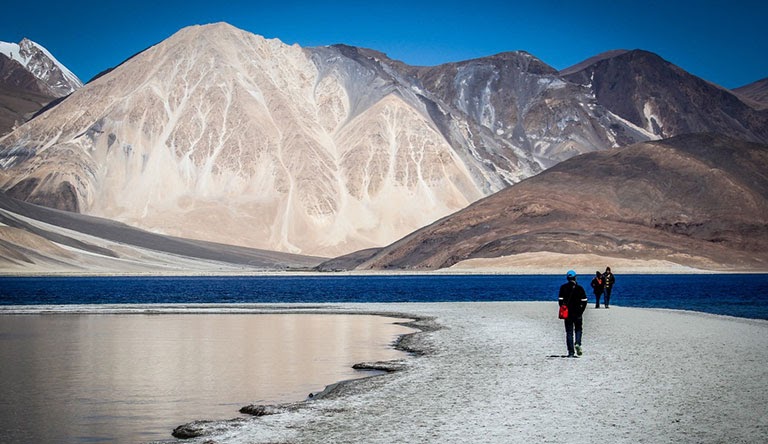 Everything to Know About Ladakh

The Trans Himalayan state of Ladakh is a whole another dimension when it comes to landscapes and terrain. The beige valley, blue rivers and snow capped mountains make up the whole view of Ladakh. The northernmost state borders China and TIbet and a part of central Asia and hence subsequently responsible for the diverse demographic and cultures merging in the region.

The state of Ladakh is the northernmost state in India with extreme weather conditions during summers as well as winters, This high altitude state is partly occupied by residents due to the unimaginable condition of survival due to height. Tourists are often asked to acclimatize in order to travel in the area due to less oxygen. Surprisingly, despite being located at such a challenging altitude, the capital city has managed to be accessible by roads, highways, and airport. The nearest airport to Leh K.G Bakula and an army airport called Those in Nubra Valley. The highways that connect Leh to other Himalayan capitals of Srinagar and Manali are opened in the summer season and closed for another 7 months due to heavy snowfall and landslides.

Top Things to do in Ladakh

When it comes to the capital city of Leh, it is the coldest place in Ladakh. The temperatures drop down -40 degrees and beyond. The city holds historical, cultural and social significance to the locals. There are several monasteries scattered all over the city. The famous tourist spots of Leh are; Leh Palace, Jama Masjid, Tsemo Gompa, Nimmu, Shey Gompa, Matho Gompa etc. the Leh palace is an ancient marvel of Tibetan architecture of the 17th century. The stone monument is built at a similar height of a 9 storeyed building. A section of this palace is turned into a museum displaying the history of the place in photographs. The Masjid in Leh is a symbol of agreement between the Ladakh ruler and Mughal Emperor during 1667 AD. The place is a beautiful structure of art with intricate design which is a perfect blend of Ladakahi and Mughalai architectural trends.

The population comprises Buddhists, Muslims, Hindus, with majority of Buddhists in the region, the state is filled with monasteries across the state. The tribes here are believed to be descendents of the Indo- Aryan community which migrated from central Asia. While the remaining population of Dard, Skardo, Shey and other Tibetan communities also occupy a few valleys of Ladakh. The majority of the population depends on agriculture, cultivation, home industry and other sources for their income.

As for trekkers, the treks in this region vary from number of days taken to complete. Some of them are usually just long day walks and hiking up the mountains, while some take days and weeks to complete which are mostly trans Himalayan treks. Some of the classic treks in Ladakh include;  Markha Valley, Darcha- Padum, Khalsar- Thakthak, Likir- Tingmosgang, Heniskud- Rangdum, Chadar Trek, Hunder- Phyang etc.

There are other tourist attractions and day excursions which include; Kargil, Zanskar Valley, Nubra Valley, Thiksey Monastery, Pangong Lake, Tsomoriri lake, Lamayuru, Suru Valley.  Despite being an isolated place, there are a handful of fun activities to do around Ladakh. The popular sports and adventure activities include; Polo, Trekking, River Rafting and Archery.

To get a closer look at the lifestyle of the locals of Ladakh, you can opt for village walks where you can walk around the small villages, interact with locals, befriend them, share stories and get mind blown by their way of living at 14,000 ft. the famous village walks include spots like Dah, Hanu Goma, Hanu Yogma covering smaller villages like Biama and Sanid. There are no modern facilities once you enter these villages, just you, hilly locals, Himalayas and most probably a cup of warm yak milk or tea.

A Trip to Ladakh is bound to impact your perspective towards life and other people. To be exposed to such extreme living conditions and interacting with people who reside here is truly a game-changing experience for all. The diversity of India never fails to amaze us, to have such a place in India is truly incredible. The people are very kind, polite and down to earth. They live by mostly Buddhist philosophies and Buddhist life teachings. The place has bare minimum facilities compared to mainland Indian villages yet it seems fulfilled with whatever they have available. Do make local purchases and take part in tourism promoting activities to enhance the region’s economy. The place is more than just a beige, barren land and rivers if you look closely.